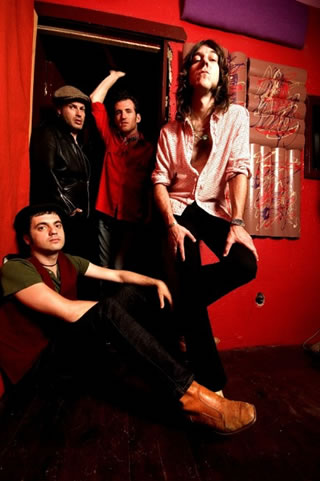 Sydney band Oohlala formed in early 2005, after bonding on blues and brandy, funk and wine, jamming and gin. Collectively dedicated to their rock’n’roll roots, Oohlala have maintained a steady and regular presence on the live circuit as they strive to deliver their rock ‘n’ roll sermons to all and sundry. Managed by Michael Browning and Sam Righi, this power house team or rock catapulted the band into high rotation on selected FM stations in Australia.

Their debut EP ‘Chop The Mutha Down’ was released in mid 2006 and enjoyed some well deserved chart time in the ARIA top 20, reaching 14 in May 2007. Well received appearances at the Peat’s Ridge and Great Escape festivals have further cemented the band’s growing reputation as a great live act.“…Their songs, musicianship and stage presence could equal any international band that has graced Australian stages…” – The Drum Media, Australian Music Magazine.“…This band is the blackest white band in Sydney. Oohlala is what The Black Crowes would have been today or what Mother Hubbard would been if they had stayed together” – The BRAG, Australian Music Magazine.

A debut album was recorded in late 2007 and released in 2008. The leading single ‘You Gotta Move’ was selected by Sydney’s home of rock Triple M 104.9 as one of five tracks to be considered in securing a support slot for Bon Jovi over two nights at the Acer Arena, Mon 21st and Tue 22nd Jan 2008. Listeners and the station overwhelmingly decided in favour of Oohlala, who won a whole new legion of fans as a result of their arena performances. The shows were so well received that the band were invited back to Triple M to perform acoustic tracks every week on their daily morning program Shebang.

Never mind the ongoing debates about digital piracy and the future of music, the four lads of Oohlala intend to fully uphold the true virtues of rock’n’roll… fun, loose and loud and a sound sympathetic to all beating hearts and dreaming minds. Let there be rock. Sadly the band called it a day back in 2012. Oohlala are a Blue Pie Records USA artist and published by Blue Pie Publishing USA (ASCAP). 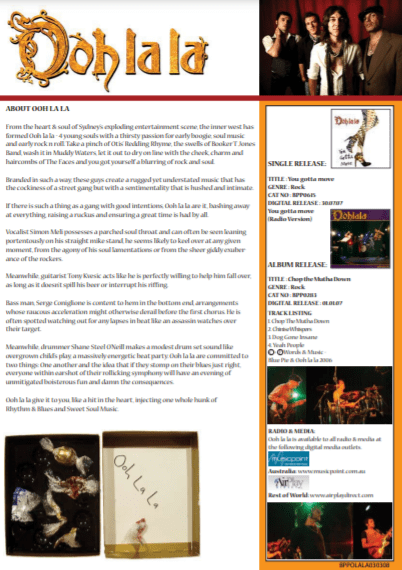